Getting Ready for another Retreat-YIPPEE!

First point: Now that all of my major weaving deadlines are behind me, I hope to be able to make this blog a bit more interesting. How? Well for one thing, I am pretty sure it will be easier to write about making quilts while I am actually making some quilts!

Would you believe it? I am getting ready for another retreat! I love this  time of year. It is a bit decedent that I go to one retreat in February, then another in April, then, yet another in June! I feel a bit guilty about all of this retreating, but only a bit. I justify it by saying that the concentrated sewing time is good for me; and so is the exhilaration you get from being among other quilters, and all of their creativity!  Also, and this is not a minor point; I will see friends that I don't get to see very often.

So my plan for this retreat is to work on 1) The Bird Cage Quilt. 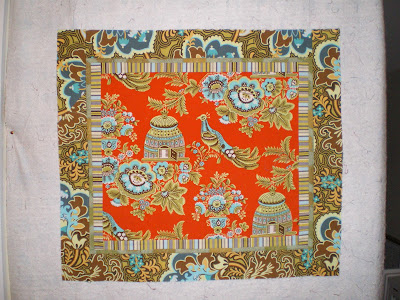 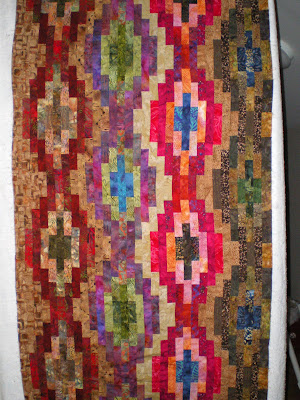 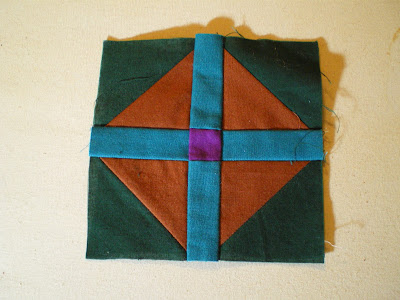 Of course you never know what you will be inspired to work on until you get there, but a girl has got to have a plan; am I right? Why not the kaleidoscope quilt? Because I only have 2 big seams left on the kaleidoscope quilt, and it is finished! So I won't bother carrying it to retreat with me, I will just finish it next week.

I have been trying to get the above solid quilt blocks as close to finished as I could get them. First I was using them as a leader/ender(Hats off to Bonnie Hunter) while I was working on sewing together my kaleidoscope quilt; and got quite a pile started. 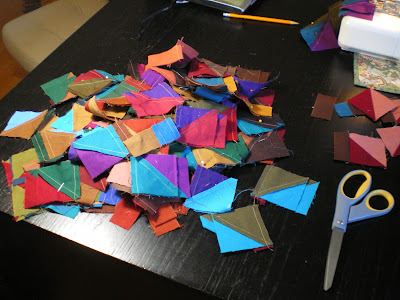 Then I really concentrated on getting the rest sewed. 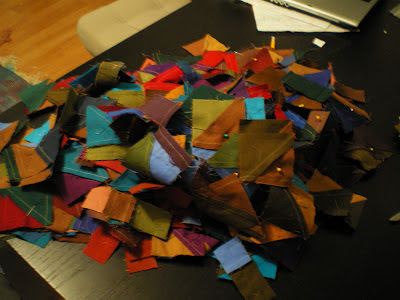 Then, they all had to be pressed, so this is where I stand now. 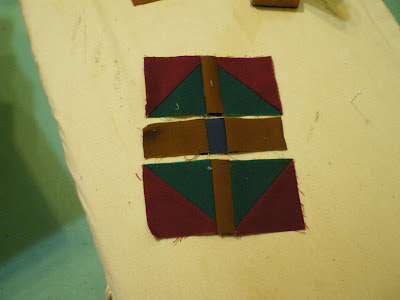 Just 2 seams to go, and those blocks will be finished; so I will be able to take them to retreat and experiment with different ways of laying them out on the design wall. I have an idea, but I won't be able to show you until I get some of them made. 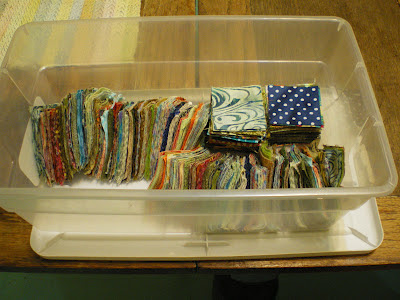 was not enough triangles, so I am cutting more. I wanted to get the whole units made in time to go to retreat but.... 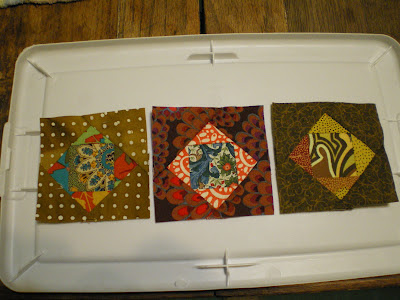 let's face it. That's just not going to happen, so I am just trying to get all of the pieces cut and paired; and I will sew them at retreat.

Another busy week! Tuesday I had a lovely time with the Phoenix Guild in Atlanta. I did a trunk show for them; and they really know how to make a person feel welcome.

Last night we had our Wednesday night Porterdale Stitching club. I worked on pinning my kaleidoscope rows together.

Just a reminder that this coming Friday and Saturday (March 16 & 17) is the Heart of Georgia Quilt Guild Show. I have so many good fiends in that guild that I decided to join it, and I will have 4 quilts hanging in the show. The hours are from 9am-5pm both days, and the show is held at the Vineville United Methodist Church. Well worth seeing if you are in the Macon area.

Last but not least; today, I received my acceptance to the Inman Park Festival in Atlanta, GA, April 28 and 29, 11am-6pm. I will have a booth showing my quilts. Come see me if you happen to be in the area. 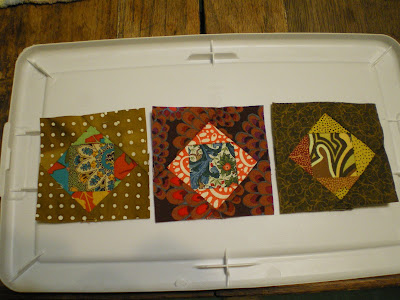 I have all of the squares and triangles cut out for my square in a square blocks for my Bird Cages quilt. 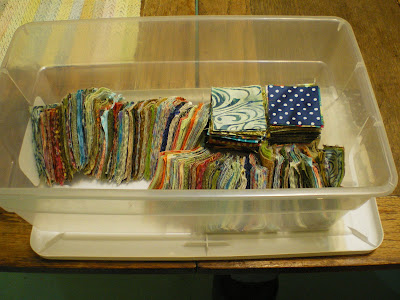 This is handy since tomorrow night is stitching club. They are all packed up and ready to go. Choosing which colors to sew together will be an easy project to accomplish while sitting and chatting with friends.

All of my kaleidoscope blocks are sewn into rows. Soon as I get them pressed, I can sew to rows to each other, and that top will be done! I have run out of time tonight; so that will have to wait.
Posted by Candace at 2:03 AM No comments:

Time With a Friend 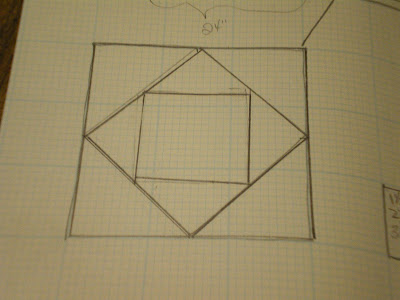 Today I spent the afternoon with a quilting friend. I couldn't work on my kaleidoscope quilt or my solid quilt because both of them are being pieced and I would have had to bring my sewing machine to work on them. It was a lovely excuse to work a bit on a quilt I have been itching to work on. My Bird Cages quilt was one I started on that retreat I went on last month. For the next step on it I needed to rotary cut some triangles. I am going to make some square in a square blocks to go around my large bird cage blocks. 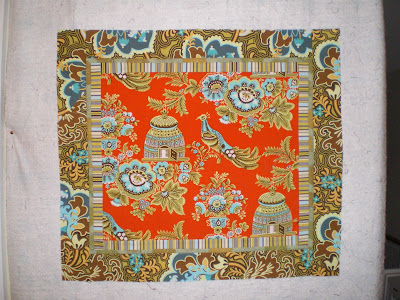 I had cut a group of strips when I was at retreat; so all I had to do was cut them into 2 sizes of triangles. 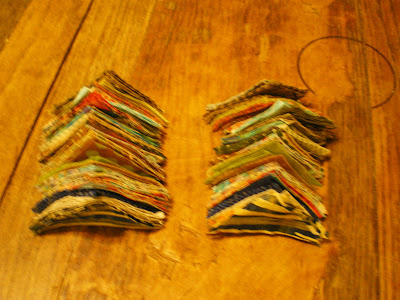 BTW, I have a ll of my kaleidoscope blocks sewn, so now I can begin sewing them together. Hopefully, I will have something to show you on that soon.
Posted by Candace at 12:30 AM No comments:

One of the things I am really not good at is naming quilts. Every once in a while, I come up with the perfect name, sometimes before the quilt is even finished. But, alas, that is rare indeed! This is really bad since I publish patterns of my quilts; and it would be nice if they had a catchy name. So, I am going to enlist your help. Below is a photograph of a quilt I finished last year. I finally got it photographed today. If anyone out there has a suggestion for a good name for this quilt, leave me a comment. If I use your suggestion, I will happily send you 1 free pattern. You can choose from any pattern that I have posted in my etsy shop, and I will ship it to you free of charge. In etsy.com, look under the shop name: quiltdesignsbycandac. It wouldn't take the last e. Too many characters, I guess. 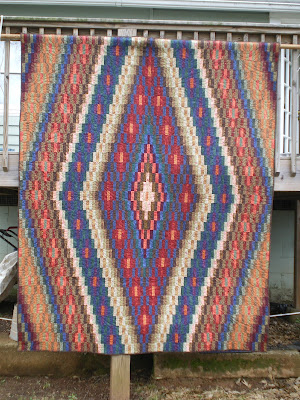 Remember, a couple of blog posts ago, I was talking about my Indian Summer quilt. I had such a good time making that quilt that I got on my EQ and designed several more. This is one. It was also influenced by a rug I wove back in college. Below is a photo of that rug; just in case that is any help. 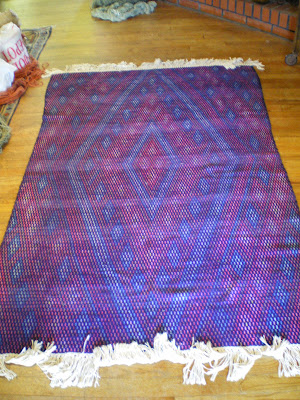 Other than that, I am still working on those kaleidoscope blocks. I should have something to show you with those before too much longer.
Posted by Candace at 11:43 PM 1 comment:

Candace
I started out as a weaver, 15 years ago I took up quilting. I have since realized how much being a weaver for years has had an effect on my quilting. They both often rely on color interplay and repeated geometric design. I design my quilts, and publish patterns from them. I love scrap quilts-the more fabrics and colors-the better. I enjoy working with traditional fabrics and patterns, and contemporary fabrics such as batiks and Rowan Fabrics. I have a Bachelor's degree in Art; I love to share my designs by doing guild programs, teaching, and making custom quilts.